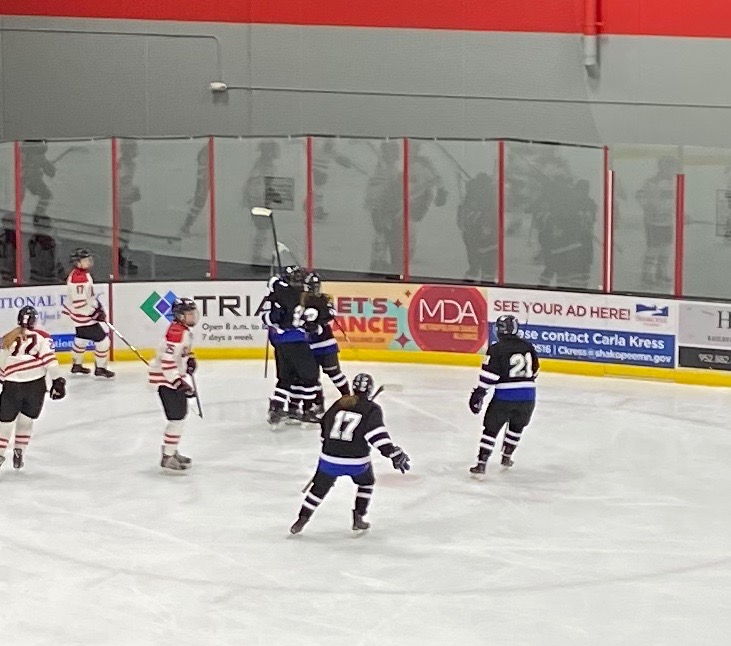 It was one of those days for the Lightning where not much broke their way and the result was a hard-fought, physical loss to Shakopee 3-4.

The Lightning generated a number of scoring chances in the first, but the period ended 0-0. Shots were 9-7.

The Sabers started the scoring in the second, at :23. The Lightning quickly responded at 3:02 when Chloe Benadum fed a sweet stretch pass from the defensive zone to Avery Chesek at the Sabers’ blue line, Chesek found Mikayla Kelley in the slot, and Kelley buried it. At 3:24, Shakopee made it 2-1, but the Lightning tied it again, this time at 7:23. Natalie Bordson and Chesek worked a nifty give-and-go that resulted in Bordson putting the puck past the Sabers’ goalie. A few posts and the shaft of the Sabers’ goalie stick kept the Lightning from taking the lead and the game was tied going into the third, 2-2. Shots: 16-13.

Shakopee hit first in the third, at 3:21. The Lightning, however, responded again when Kelley stole the puck at the Sabers’ blue line and found Chesek in the slot for the goal. Shakopee took the lead for good at 7:03. Despite many good chances, the Lightning could not find the equalizer. The shots ended 24-22.

The result leaves the Lightning 15-6-2 as they enter the last week of the regular season. Tuesday, January 28, is a HUGE rematch with the conference leading team to the west. The Lightning prevailed the first time around, 3-2, and there is no doubt revenge is on the opponent’s mind. JV plays at 5:00 and Varsity at 7:00. Fill the stands and cheer the girls to another big win!! #ChallengeAccepted Go Lightning!!