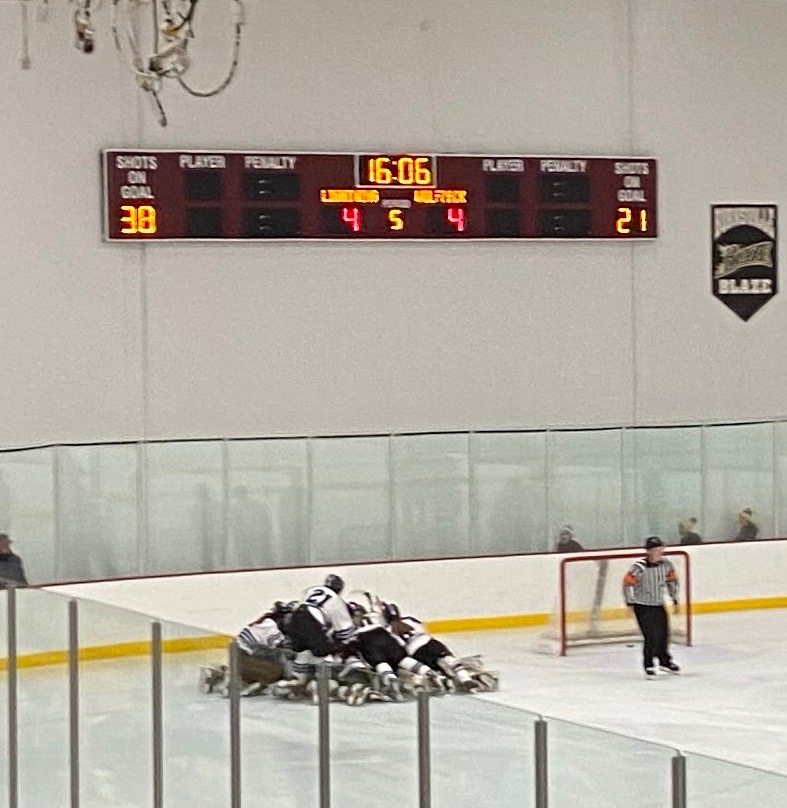 What. A. Game. The Lightning beat Park of Cottage Grove 5-4 in 2OT to advance to the Section 3AA Semifinal. Josie Ellingson scored the game winner and earned Eastview’s player of the game for her effort.

Eastview jumped to an early lead at 7:57 of the first period. Avery Chesek pilfered the puck in the neutral zone and turned the turnover into a 2 on 1. Chesek made a sweet pass to Mikayla Kelley and Kelley pounded the puck into the back of the net. Park responded with 2 power play goals and took a 2-1 lead. The Lightning, however, battled back and tied the score at 13:09. Larissa Hafley found Kelley in the high slot and Kelley found Chesek in front of the net where she hammered the puck past the goalie. 2-2 at the end of the first. Shots 13-6.

At 2:37 of the second, Nora Stepan hit a streaking Kelley at mid-ice. Kelley carried the puck into the Wolfpack’s zone and found Natalie Bordson in front of the net where Bordson bamboozled the goalie with a series of moves to make it 3-2. The score remained 3-2 at the end of the period. Shots were 22-11.

The Wolfpack hit first in the 3rd and tied the score at 3. At 4:29, the Lightning struck back and regained the lead when Bordson fed Kelley in the slot and Kelley found Chesek who zipped it past the goalie. The Wolfpack refused to fold and tied the game again with less than 5 minutes left. The score was 4-4 at the end of regulation. Shots were 29-17.

Despite many good chances, the Lightning could not break the tie during the first overtime. The shots were 36-20.

Fifty-four seconds into the second OT, Ellingson hit Brynn Swenson flying up the left wall. Swenson carried the puck into the Wolfpack’s zone and fired a shot at the net. Ellingson crashed the goal and put the rebound behind the goalie for the game winner. Final shots were 38-21. Lauren Johnson was strong in the nets for the Lightning.

The win moves Eastview to 18-6-2 and to the Section 3AA Semifinal on Saturday night at 7:00 at AVSA. The Lightning will host Burnsville. The two teams split during the regular season, each winning 3-1 on home ice. Thank you to the great fans who attended the game! We can’t wait to see you all on Saturday! #ChallengeAccepted Go Lightning!!