Congratulations to Eastview senior Lauren Glas for being named Eastview High School’s recipient of the Athena Award in 2018-19.  Lauren has been a key member of our girls soccer and basketball programs during her high school career.  She is a two-time captain, four year letter winner, three time All-Conference Award winner and was named both All-State and to the Senior All-Star Game in her Senior year. In addition she was a two-time All-Section award winner, the team MVP and team Lightning Award winner. In basketball, she will be a four-time letter winner, was named All-Conference in her junior year and is a captain as a senior.  The team has experienced a great deal of success with 3 straight State Tournament Appearances including a pair of 3rd place finishes and an undefeated State Championship last year.  She has signed a National Letter of Intent to play Division 1 Soccer next year at the University of North Dakota.  Lauren is also a strong student with a 3.75 GPA and is also involved in the Developmental Psychology, LINC Leader and FCA programs at Eastview.  The Athena Award is awarded to the “outstanding senior female athlete” in each school.  The award is based on excellence in individual sports or for participation and accomplishments in team sports.  Athena is the Goddess of Wisdom and Skills. She was brave and possessed the essence of all that is noble.  Legend tells us that she possessed the gifts of dignity, power, and youth, making her invincible.  Lauren will be recognized at the St. Paul Athena Award banquet on Wednesday, April 24th.  Congratulations to Lauren and all of our Athena Award finalists on such outstanding careers at Eastview. 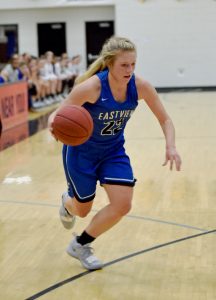 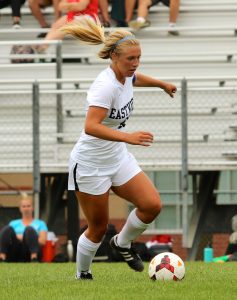