APPLE VALLEY, MN- Eastview High School Assistant Principal for Curriculum and Athletics Matt Percival has announced the hiring of Molly Kasper as Head Softball Coach for the 2017 season.  Kasper will replace Trevor Monroe who resigned this past off-season from his head coaching duties to allow him the opportunity to spend more time with his family including watching his daughter play collegiate softball.  He remains at the school as a physical education teacher and an assistant boys basketball coach.

Coach Kasper is no stranger to Eastview High School as she is in her second year as a Work Experience teacher and Head Girls Basketball Coach.  In her first season as head basketball coach at Eastview she led the Lightning to a 3rd place finish at the State Tournament and a 27-5 overall record.

In high school Kasper was a standout three sport athlete for Eau Claire North High School, playing tennis, basketball and softball.  She was a four year starting catcher during her high school softball career.  During her sophomore year, she earned second team all-conference honors while helping lead her team to a state tournament berth.  During her junior and senior year she was named first team all-conference, while also earning first team all-state honors her senior year.

In college Kasper had opportunities to play both softball and basketball and ended up accepting a basketball scholarship to Winona State. She was a four-year starter and led the Warriors to a program-record 24 wins during the 2008-09 season and helped the team earn its first-ever spot in the NCAA Division II Tournament. She was an all-conference and all-academic honoree in her time as a Warrior as well.  Kasper led the NSIC in assists as a senior, passing out 6.03 assists per game. She led Winona State in assists, rebounds and steals during both her junior and senior seasons.

Kasper graduated from Winona State with a degree in Business Education in 2009. She also holds a Master’s Degree in Education Leadership and Sports Management.  Kasper recently completed her special education LD and EBD licensure at Concordia State University-St. Paul.

Kasper is a native of Eau Claire, WI and a graduate of Eau Claire North High School.  She currently resides in Rosemount with her husband Derek and their daughter Ellie.

ATTENTION ALL CURRENT EASTVIEW HIGH SCHOOL SOFTBALL PLAYERS AND PARENTS:  There will be an opportunity to meet Coach Kasper at short introductory “meet and greet” next Tuesday, October 4th at 6:30 p.m. in Lecture Room C350 at Eastview High School prior to the Fall Kick-off Meeting.

“My family and I could not be more excited to become a bigger part of the Eastview family.  I look forward to the opportunity to work with the female student-athletes in our softball program!”

“Ín a very short time at Eastview Coach Kasper has had a huge impact on many of our students and in particular our female student-athletes at EVHS.  She has an incredible passion for working with kids and we are very excited to have her leading another program in our building!” 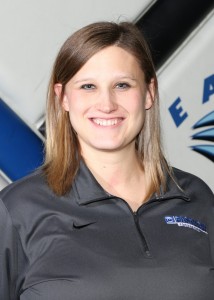