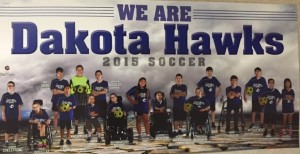 The PI Dakota Hawks Soccer team is heading to the State Adapted Soccer Tournament this weekend at Stillwater High School as the #1 Seed from the South Division!  They were the South Division Champions after an impressive undefeated regular season.  The Hawks will face Mounds View/Irondale/Roseville at 6:30 p.m. Friday Night in Gym A.

Good luck to Eastview Senior Ben Okke and his Hawks teammates at State!