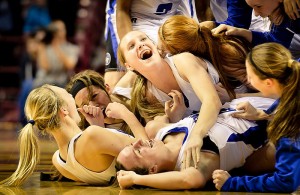 Eastview found itself down most of the game with Kennedy jumping out to an early 16-6 lead and 37-32 lead at half time but Eastview kept their poise, patience, and persistence and used a used 10-0 run in the final 2 minutes, 15 seconds to secure the championship.

Guebert finished the game 10-16 from the field and 5-6 from the line for 29 points. Kari Opatz (13 points) went 3-6 from the arc and added two free throws with 18.2 seconds left to put Eastview ahead by 3. Emee Udo and Hana Metoxen (11 points) were a combined 9-10 from the line and lead in rebounds with 7 each. Udo scored all six of her points after halftime and ignited the game’s definitive run with four consecutive points. Metoxen hit 2 huge free throws with one minute to play to put Eastview within one point. Megan Boehm was 2-4 from the field for 4 points, including a beautiful spin move to the hoop. Erika Schlosser delivered a key driving layup at the end of the first half to put momentum on the Lightning side, as well as a key defensive tip to cause an Eagle turnover with less than one minute to play. Rachel Ranke came off the bench in the second half, driving strong to the hoop to force a foul and free throw.

Together We Can become 2014 MSHSL State 4A Champions! 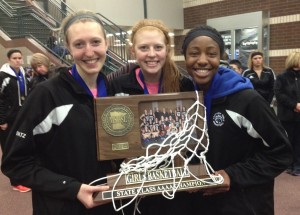 Thank you to our seniors for all of your hard work throughout the years. We will miss Kari Opatz’ sharp shooting, Emee Udo’s free throw accuracy, and Megan Boehm’s half-court-chicken-winning shot. 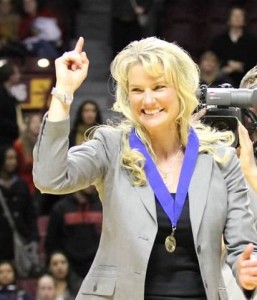 Melissa Guebert became the first female coach to win a Class 4A championship since the format began in 2004.

Bring Me the News: Eastview Wins its First Title in Class 4A

Star Tribune: Second Half Rally Lifts Eastview to 4A Title Over Bloomington Kennedy